An outlet for my non-final thoughts and ramblings wherein I try to say something constructive and meaningful about Christianity, life, etc. 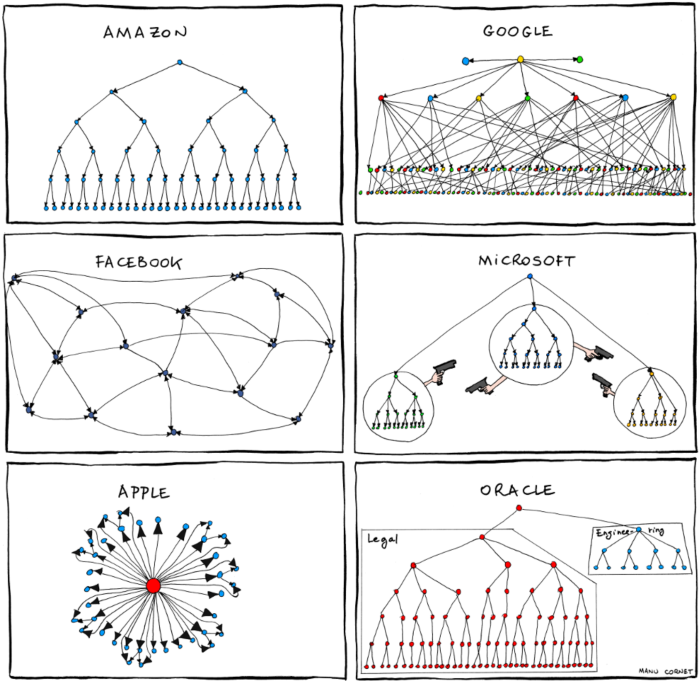 I’m not really sure where this image came from originally, but it has been circulated on the internet for years to (somewhat sarcastically) illustrate the basic ethos of reporting models and values of the businesses it depicts. I enjoy thinking about this chart in relation to church governance.

Amazon – I’d have to say that is probably best represented by the Roman Catholic church; a very clear hierarchy that increasingly expands at each level.

Google – I think the United Methodists are closest to this model. Our General Conference would be at the top and pretty much everything that gets up to that level is mutually influencing and a jumbled mess of cross pollination/attempts to control one another with a theoretical hierarchy that doesn’t actually have the power or structure to do anything about disagreement.

Facebook – I’d put the Southern Baptists here. It’s a big web of people supposedly doing the same thing and talking to each other some, but without anyone or anything at the top to settle disagreements for and between churches.

Apple – I clearly have to put the mega/non denominational church phenomenon here. One charismatic pastoral leader is so often the center of gravity for the whole organization.

Oracle – I don’t know. I might put Anglicans here, but probably could put Roman Catholics and frankly any mainline denomination here for the same reason – centuries of bureaucratic build up and layer after layer of stuff that was built for a world that presumed the church was at the center of life and public influence have led to a reality in which what we say we do and what the organization actually looks like aren’t always equal.

Microsoft – I skipped this because I don’t know enough church history to offer one separate tradition. But if I can expand the rules a bit, I’d definitely say this fairly well represents the liberal vs conservative vs evangelical vs progressive vs [pick your favorite buzzword faction] dynamics that exist within and across most denominational lines these days.